The ghost of a Japanese-American actress returns to wreak vengeance on the ambitious husband who betrayed her in this contemporary fusion of Macbeth and the Kabuki Yotsuya Ghost Tales.

Streams on Vimeo Halloween Weekend!
Thursday, October 28th at 8:00 PM EST through Monday, November 1st at 7:59 PM EST.  To Register/be notified when the Vimeo link goes live, join the RED MAILING LIST tab on the right side of the capemaystage.org homepage. Tickets are free. Donations are encouraged and appreciated.

Spend a haunting Halloween with Japan’s most terrifying female ghost! The true tale of Oiwa’s undying vengeance is the original J-Horror story, retold here with a contemporary twist. A Japanese-American actress returns from the dead to wreak vengeance on the ambitious husband who betrayed her in this original play fusing Macbeth and the Kabuki Yotsuya Ghost Tales.

This digital experience is presented by La Luna Productions as a fundraiser/benefit for Cape May Stage with a portion of the donations going to stopasianhate and stopaapihate. “Revealing any more of the story of the delightful and chilling production would not only be unfair to you, but would very likely anger at least one very temperamental theater ghost… the perfect recipe for a goosebump-filled evening.”   – ScreamQueenz 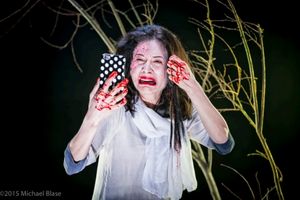 “fresh, modernized take as play-within-a-play of two Broadway-bound theatre stars with chilling yet cheeky homages to kabuki and Shakespeare’s Macbeth… delivering a genuine cross-cultural celebration of the revenge genre… hooked us into this pleasantly unpredictable theatrical experience from start to finish”. – theasy.com 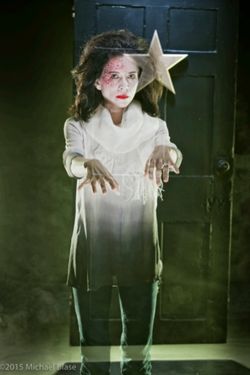 “If you are looking to get spooked-out theater style, then this is for you… loads of suspense and unexpected things that happen that will startle and rattle you and keep you on edge.”    – The Examiner Replete with glamour, betrayal, blood and irony, the Off-Broadway production of Ghost Light: The Haunting was New York Metro’s featured Halloween “must see” for 2015.

Performances of Ghost Light stream continuously for only four days:

We wish to express our gratitude to the Performers’ Unions:

through Theatre Authority, Inc. for their cooperation in permitting the Artists to appear on this program.